Igor Fyodorovich Stravinsky, one of the most influential—and controversial—composers of the 20th century, was born exactly 134 years ago today: June 17, 1882.

Stravinsky was a pianist and a conductor, but most importantly, a composer. His compositions were and still are famous for their diversity and inspiration. Of course, that doesn’t necessarily mean his works were received enthusiastically; one of the most legendary musical tales told is that of the riots that broke out after the premiere of his Rite of Spring. Even today, more than a century later, Stravinsky’s music sounds radical and unprecedented. Stravinsky was a musical pioneer, born in a time ripe for testing the limits of musical design, a time when the reigns of more classical composers were coming to an end and a new generation of musicians was beginning to emerge. Stravinsky lived in and among this. He listened to Saint-Saens, Tchaikovsky, and Strauss, but also Bartok, Debussy, and Ravel. Being right in between “old classical” music and contemporary music must have influenced Stravinsky’s works and accounts for their diversity. 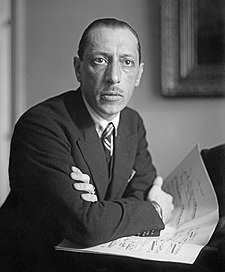 Stravinsky was born and raised in St. Petersburg, Russia. His father, Fyodor, was a bass singer and his mother played the piano and sang as well. Stravinsky began studying piano and music theory as a young boy and attempted some composition. He was a sensitive, mild child, which is surprising considering his dissonant compositions, which were later described as “heavy”, “cacophonous”, and “a barbarity”.

It is not clear how soon Stravinsky experienced large works such as ballet and opera, but as his father worked as an opera singer close by, it must have been common for the young boy to venture over to the Theatre Square to watch Rimsky-Korsakov’s Christmas Eve or Borodin’s Prince Igor. It was natural that by 17, Stravinsky was an opera aficionado, collecting scores and sightreading them for hours on end.

Meanwhile, Stravinsky’s parents were urging him to enter law school despite his enthusiasm for music. Stravinsky enrolled at the University of St. Petersburg, but as time went on, he spent less and less time on law and more and more time on music.

However, there was an upside to law school – there, Stravinsky met Vladimir (Volodya) Rimsky-Korsakov, youngest son of the famed composer Nikolai Rimsky-Korsakov. Up to that time, it is probable that Stravinsky never thought to approach any of his teachers for advice on composition. Volodya persuaded Igor to bring his works to Nikolai. Upon discovering that both he and Igor would be summering in the same town in Germany, Volodya suggested that Igor try to visit him and his family. Stravinsky was 20 then. He did bring music to show to Rimsky-Korsakov. However, Rimsky was not very impressed with Stravinsky’s compositions; Stravinsky wrote: “He made me play some of my first attempts. Alas! the way in which he received them was far from what I had hoped.”

Yet these works still caught Rimsky’s attention and intrigued him. Something in Stravinsky’s music must have foreshadowed his future musical personality. Rimsky advised Stravinsky to study composition with his current teacher—Kalafati—and Rimsky himself would oversee Stravinsky’s compositional development. Over the next 6 years, until Rimsky’s death in 1908, Stravinsky was in close contact with him and became a part of his circle. Stravinsky formed many friendships through his relationship with Rimsky while patiently developing his skills.

Stravinsky’s father died of cancer that year (1902), and after long months of mourning, Stravinsky found a relief in throwing himself completely into music. His mother Anna still insisted on his attending law school, but Stravinsky continued to study his counterpoint, played often, and went to many concerts, sometimes with Rimsky. Rimsky himself held informal evenings of music discussion and performance at his home and Stravinsky enthusiastically took part in it all. It would not be an exaggeration to say that Rimsky became something of a second father to Stravinsky; Stravinsky also formed close bonds with Volodya and Volodya’s elder brother, Andrey.

In 1906, Igor married his cousin, Yekaterina (nicknamed Katya), and their first two children were born in the next few years. Meanwhile, Stravinsky continued work on his compositions. In 1909, Stravinsky’s Scherzo fantastique and Feu d’artifice (Fireworks) premiered in St. Petersburg. Sergei Diaghilev, a ballet impresario, was planning to present Russian ballets in Paris and was impressed by Igor’s Feu d’artifice. Diaghilev commissioned Stravinsky to arrange some pieces by Chopin for Diaghilev’s company, Ballets Russes. Afterward, Diaghilev commissioned him to write the music for a full-length ballet, The Firebird. (Interestingly, Stravinsky never had the idea for The Firebird; Diaghilev had already planned the plot itself and needed only a composer to write the music to it.)

Upon its premiere in Paris, 1910, The Firebird was an immediate success and Stravinsky was considered a sensation. Diaghilev, a stern and intense man, commented, “Mark him well; he is a man on the eve of celebrity…” It is fitting that after so many years of study with Rimsky-Korsakov, Stravinsky’s first great success utilized many musical ideas of Rimsky’s.

After spending the summer in Brittany, Stravinsky and his family moved to Switzerland. Over the next four years, they spent their summers in Russia and their winters in Switzerland and Stravinsky kept on composing. In 1911, Stravinsky’s Petrushka premiered. It, too, was a success. Alexander Glazunov, who had criticized Stravinsky’s Symphony in E-flat years before, said: “Petrushka is not music, but is excellently and skillfully orchestrated.” The more enthusiastic Richard Taruskin said that Petrushka was when “Stravinsky at last became Stravinsky”.

After Petrushka came The Rite of Spring, which famously incited riots at its premiere in 1913. Disturbances began in the Introduction and quickly grew into “a terrific uproar”. The orchestra did not come out without a few knocks either – “Everything available was tossed in our direction, but we continued to play on.” And yet everything settled down by Part II and the final scene was performed in peace; there were even curtain calls for the dancers at the end. Diaghilev admitted himself quite pleased with the outcome, and Stravinsky said that the choreography by Vaslav Nijinsky was “incomparable: with the exception of a few places, everything was as I wanted it.”

Stravinsky then turned his attention to completing his first opera, The Nightingale, which he had begun before he had met Diaghilev and started his ballet-writing. The Stravinsky family returned to Switzerland as usual in the fall of 1913. In early 1914, a fourth child was born. After her delivery, Katya was discovered to have tuberculosis and was sent to a hospital in the Alps. Igor and the family took up residence nearby, and he completed The Nightingale there.

In April, they were finally able to return to Clarens, Switzerland. Diaghilev undertook to put on The Nightingale and it premiered that year. Unfortunately, there was slight enthusiasm for it, probably because it did not meet the public’s expectations after The Rite of Spring the year before.

From 1915 through 1969, Stravinsky moved to many different places; from Clarens, Switzerland to Morges, Switzerland, then Brittany, and then Paris. In Paris, Katya—to whom Stravinsky had been married for 33 years—died of tuberculosis.

Stravinsky, at 57, then decided to move to America. He was drawn to Los Angeles, especially since due to WWII, many writers and musicians were settling there. So the newly widowed Stravinsky sailed for the United States. He settled in West Hollywood and spent more time living in Los Angeles than any other city. In 1969, Stravinsky moved to his final home in New York. He lived there until his death of heart failure in 1971. He was 88. He was buried at San Michele, close to the tomb of Diaghilev.

During Stravinsky’s neoclassical period (1920-1954), he explored the music of the Classical Period and delved into ancient classical myths. For instance, Stravinsky’s two ballets Apollo and Orpheus are based on Greek mythology, as is his opera Persephone.

The serial period is not just one of Stravinsky’s periods; it is a well-known method of composition called serialism. Serialism involves applying an idea or “rule” to a piece. The earliest example of serialism would be Schoenburg’s twelve-tone technique. This twelve-tone technique is a compositional method whereby every tone in the scale is treated equally—rather than focusing on one key signature and its associated scale—and every tone is used as frequently as the other eleven tones. Twelve-tone technique is just one example of serialism, however; different rules, such as tone duration or dynamics, may be applied for a piece to be “serial”. Stravinsky began experimenting with Schoenburg’s twelve-tone technique in the 1950’s, composing such works as Three Works from Shakespeare and Canticum Sacrum. Stravinsky continued to write serialistic pieces until 1968.

The Rite of Spring (orchestra only)

For a shorter work, here’s a Pastorale for piano and violin, written 1933

And here’s a Tango for piano

His Elegy for Solo Viola

Stravinsky not only influenced people during his lifetime, but also the many musicians after it. It goes to show what one man and a lot of work can do. With little training and a relatively late start at composing, Stravinsky didn’t just rely on his natural musical impulses – he worked hard to develop into an innovative composer who will be remembered for years to come.