Long ago, before the piano was invented, ornaments were the mainstay of keyboard works. The harpsichord was a popular instrument at that time, but it was limited in its tones’ durations, so ornaments were created to fill up the space between chords. Ornaments were not just helpful for the harpsichord’s short tones, though – they’re pleasing to the ear on the modern piano today and I personally think ornaments are enjoyable to play.

Ornaments range from quick acciaccaturas to three or more measures’ worth of trilling. While they may seem similar and near impossible to separate into discrete groups, they’re actually very different when compared in terms of usage, tempo, etc.

One thing I like about ornaments, especially concerning the ornaments Bach placed throughout his music, is their flexibility. As we’ll see later, the trill (and others!) can be played several different ways – it’s often up to the performer to decide on the exact timing. Some ornaments can even be timed to give a cadenza-like effect, as though the performer is improvising the ornaments him or herself.

So, having a thorough knowledge of ornaments helps while sight reading, but really knowing how each ornament contributes to the melody and mood of the piece is crucial as well. Understanding the meaning and possibilities behind each ornament allows us to develop our style of ornamentation in a creative way.

Getting started, a note: there are several general ornaments and they all have variations. The most important point is not to get overwhelmed. This is a wordy post, there are variations to everything in it, and I’ve given you a liberal sprinkling of confusing terms throughout it – but hopefully it’ll all make sense in the end.

The trill—or shake, as it used to be known—is probably the freest of all ornaments. Put simply, a trill is an altercation between two adjacent notes quickly played back and forth for a minimum of four notes. The performer can choose to linger on the first note for a little longer then fall smoothly into an accelerating trill back and forth.

There are also different ways to begin a trill:

1. The first way is to begin on its upper neighbor, thus accenting the higher note in the trill. This is how trills were generally played throughout the Baroque and Classical period. (For a better-defined guideline of which trills should begin like this, click here.) An example is a trill in Baroque music (see first trill in the photo above). The trill would begin on D—possibly with a little pause before falling naturally into the trill—and continue, C-D-C-D and so on. However, this means that D would be accented. Note that all trills, from whatever period, begin on the beat.

2. The second possibility was used in the late Classical and Romantic periods. This is to begin the trill immediately from the main note, which would make our example above go C—perhaps with a slight pause—D-C-D and so on. Played this way, it accents the principal note.

3. The third possibility, which is very uncommon, is to begin the trill on the note lower than the main note. This would mean, in our example, that the performer must play a B—again, lingering a little—C-D-C-D, etc. There’s some exploration to be had here.

Note that a trill starting from the note below is quite different from a trill that has a prefix before it. A prefix is a sort of “preparation” for the trill. Whereas beginning the trill on a lower note would be B-C-D-C-D (with accents on the C), a trill with a turn would consist of B-C, then the trill of D-C-D-C (with accents on the D). A trill with this beginning is also called a “trill with prefix from below” or “ascending trill”. Also, this prefix doesn’t count towards the minimum of four notes necessary for an ornament to qualify as a trill. Therefore, if a trill has a prefix, that means it must have a minimum of six notes in it.

There is also a trill with a prefix from above, which is also called a descending trill. This pre-trill ornament is similar to a turn, which we’ll learn about in a moment. Because the prefix doesn’t count towards the minimum number of notes in a trill, the new minimum is eight notes for a descending trill. Take a look at the table of ornaments at the bottom of this post to see how trills with prefixes and terminations are notated.

I’ve heard the opening trill of Chopin’s famous Nocturne No. 20 in C Sharp Minor begun on the note above the trilled note, which is incorrect. Ashkenazy’s interpretation of the piece is wonderful and note that his trill begins on the main note (0:24). There’s also an excellent example of a trill with a turn at 1:07.

expected to fill some in with terminations, regardless of whether or not they’re notated. This demonstrates just how common and free ornaments were in the Baroque period.

Sometimes trills also have notation above them to modify the higher note by a half-step. If, for example, one wished the performer to trill with E-F#, one would place a sharp sign above the tr to indicate that the F is sharp.

Next up is the mordent, which, I think you’ll be pleased to hear, is much simpler than the trill. Mordent is derived from the Latin mordere, meaning “to bite”. And indeed, that’s basically a mordent’s job. The mordent is a quick little ornament, going from the main note, up or down a note, and then back up or down again. Mordents are performed very rapidly to add brilliance to a note and sometimes to accentuate the rhythm.

Mordents look a bit like trills and actually, there are long mordents which are quite similar to trills. They can even be modified like trills with sharps, flats, and naturals.

However, the difference lies in the length of the note. Mordents cannot take up the full value of the note as a trill can. C. P. E. Bach once wrote:

“A small portion of its original value must be left plain, since even the best used mordent sounds terrible when carried, like a trill, directly into the following note.”

As shown in the first example of this section, a mordent that consists of the principal note, the note beneath it, and the principal note again is notated with a vertical line that runs through the typical notation. This is called an inverted mordent.

The turn is a free ornament – it’s generally up to the performer to determine its speed. The “turn” is self-explanatory, for it consists of beginning with a note higher than the main note, down two steps, and then a turn back to the main note. In our example, this C with a turn would be played D-C-B-C. Really, turns can be thought of as small trills with terminations. 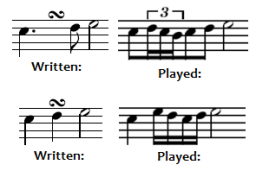 A turn can be played however desired, but the examples above illustrate general timing.

When a vertical line is running through a turn, that signifies an inverted turn.

In Haydn’s time, trills, mordents, and turns were still very popular. Listen to his Divertimento in C and notice that it has several mordents and a trill in just the first page of the beginning movement, and in the second page, he added more than ten turns.

The appoggiatura is derived from the Italian appoggiare, meaning “to lean”. Appoggiaturas are important melodically because they are used to indicate suspension before a final resolution. They always come on the beat and are usually held for half the principal note, when the principal note is divisible by two. When the main note is dotted, the appoggiatura is held for two-thirds the value of the main note.

I could get into unaccented appoggiaturas and double appoggiaturas, but they are, for the most part, uncommon, and the regular appoggiatura is the one you’ll see most often.

The pralltriller (“compact trill”) is a trill that is only possible on the second note of a descending second. The pralltriller contains only four notes and the first is tied. Some view the pralltriller as a mordent, but it’s better to think of it as a trill in which the first note is tied so it doesn’t sound.

The arpeggio is not so much an ornament as a style of playing,

mainly used in the Baroque Period. Arpeggiation is simply spreading a chord’s notes out instead of playing them all at once – it makes sense that “arpeggio” is derived from the Italian arpeggiare, meaning “to play on a harp”.

The glissando, from the French for “to glide”, is a slide from one note to another. There are two types of glissandi: discrete and continuous. The discrete glissando is one that changes pitch, but step by step rather than continuously. Keyboard instruments can play only discrete glissandi. Continuous glissandi are impossible because the keys represent certain pitches with nothing between those defined steps. However, on a stringed instrument, a continuous glissando is simple to play – it consists of sliding the finger up or down to slide the pitch.

Because the two types of glissandi are so different, sometimes the continuous glissando is differentiated from the discrete by the term portamento.

While I personally associate glissandi with jazzy saxophone solos, they’ve been around for longer than you might think; the final movement of Beethoven’s Waldstein Sonata calls for glissandi in octaves.

The ribattuta is an uncommon ornament found in Italian and German works of the 1600 and 1700s. It’s basically a dotted rhythm that culminates in a trill.

As shown, the ribattuta gradually accelerates with its long-short rhythm until it falls naturally into a trill.

A thorough table for trills, mordents, appoggiaturas, and their variations

The mordent, as I already mentioned when talking about pralltrillers, is sometimes called a pralltriller or schneller. However, in the Baroque period, the term “mordent” referred to an inverted mordent. In the 19th century, the upper mordent became known as simply a mordent, while the lower mordent became known as the “inverted mordent”. Yes, confusing indeed.

Pralltrillers are also called half shakes or passing shakes.

Though Bach utilized ornaments extensively, he never used the acciaccatura – he always used the appoggiatura.

C. P. E. Bach was a great proponent of beginning every trill with an appoggiatura. He said beginning a trill on the main note “is an error as ugly as it is frequent.”

That wavy line that signifies a trill or mordent is called a chevron.

Well, I’ll try not to prolong the end of this very long post! 🙂

It’s been lengthy, but hopefully some things have been cleared up. They’ve more than just cleared up for me, though – I’ve learned a lot on this post. I never knew what the ribattuta was or that a grace note is not necessarily an acciaccatura.

Ornamentation, no matter how small it seems, is really a vast land of possibilities. It’s an opportunity to experiment and stretch the musical boundaries.

One thought on “A Compendium of Classical Ornaments”